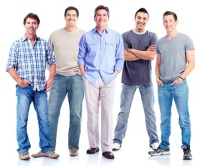 At Young Eyes we know men are less likely to get their eye health assessed. Men between the ages of 45 and 74 utilised the least level of optometric services in 2016, according to Medicare.
Most conditions causing vision loss that we see at Young Eyes can be treated. Failure to treat them can however stop healthy independent ageing.

Glaucoma patients are at least five times more likely to be involved in a motor vehicle crash compared with others in the same age group, despite meeting legal driving requirements, a new study has found.

Does Your Eye Colour Influence Cataracts?

Everyone is at Risk of Cataracts. However, did you know that you could be more at risk simply because of the colour of your eyes?

People with dark brown eyes have the greatest possibility of developing cataracts. An Australian study found that the risks can be up to 2.5 times more likely for certain types of cataracts

Macular Degeneration - Can I Lower My Risk?

Each year 1 in 4 Australians are at risk of losing part or all of their vision to eye disease. Despite the fact that 75% of vision loss is preventable or treatable, 2 out of 5 Australians are still not having their eyes tested at least once every two years, according to the latest Newspoll1 commissioned by The RANZCO Eye Foundation as part of its annual 'JulEYE' campaign.